Spooky Architecture That’s Sure to Creep You Out

The days are getting shorter, the nights seem darker and the calendar is heading towards the most supernatural night of the year, Halloween. As we approach October 31st, it seems like the perfect time to discuss spooky architecture including gargoyles, haunted houses, and everything in between.

When was the last time you saw a building or architectural component that gave you goosebumps? Could you pinpoint what it was that made your skin crawl, or was it an overall feeling? For some, it is the eerie ambiance that a building gives off, while others explain that the fear comes from the architectural design, and still others claim the spook-factor is attributed to the skillful use of lighting design. 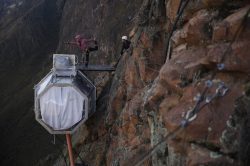 Do heights scare you? Then these capsule hotels built into and suspended on the side of  365-metre mountain in Sacred Valley, Peru are sure to give you the chills. Each Skylodge Capsule Hotel room is constructed out of sturdy polycarbonate and aerospace aluminum, and each eight-person suite features six windows and four ventilation ducts. Visitors must climb 400 meters to reach each pod then enter through a top-mounted hatch. Each living space is outfitted with beds, solar powered lamps, and dry ecological toilets and sinks. The view, as it looks over a majestic valley under the open skies, is the main attraction. Do you dare stay the night? 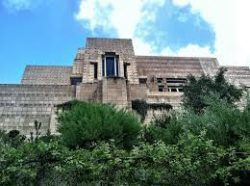 The Ennis House is a residential dwelling in the Los Feliz neighborhood of Los Angeles, California. Designed by Frank Lloyd Write in 1932, it is an example of textile block design and it is constructed of interlocking precast concrete. The house first acquired morbid fame when it appeared in the movie House on Haunted Hill in 1959 and continued its role as a spooky home in Blade Runner in 1982. Originally inspired by early Mayan temples, this iconic Hollywood home is tops on the list of places you may not want to send your kids for Trick-or-Treating! 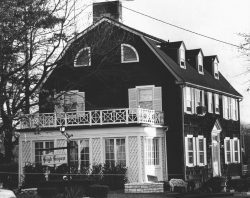 The Amityville Horror House is a Dutch Colonial Revival Home built in Amityville, New York, just 30 miles outside of New York City on Long Island. This house is forever linked to the Amityville Horror Phenomenon. The home was the scene of a grisly murder in 1974 when 23-year-old Ronald J. DeFeo Jr. murdered his entire family while they were asleep, which included his parents and four siblings. Almost a year later, a new family moved into the home only to flee less than a month later because of the reported spine-tingling tales of paranormal activity. The home was then propelled into horror legend as “America’s Most Haunted House.” Books, documentaries, and movies were all published with the tales of the events for years. Would you spend a night there?

The famed Cathedral of Notre Dame has watched over the City of Paris since it was built in 1250. Known as one of the world’s most beautiful Gothic Cathedrals, it was almost lost earlier this year to a massive fire. The architecture and breathtaking stained glass windows are not the only components that make the structure fascinating, the stunning beasts or gargoyles do as well. These sculpted beasts are part animal, part mythical creatures. According to VintageNews, the Gothic idea of a damned afterlife is one of pain and suffering, and the gargoyles can be said to represent the demons outside versus the sanctity and safety of the church inside. Do these beasts send a chill up your spine?

This Halloween, take a look at the buildings around where you live or work. See if any of them could be classified as spooky. Let us know or drop a picture on our Facebook page or in the comments.